HE is a short story by American horror writer H. P. Lovecraft, written in August 1925, and first published in Weird Tales, in September 1926. The story HE was written after an all-night tour of the remnants of Old New York. By 7 a.m. the next morning, Lovecraft had reached Elizabeth, New Jersey by ferry, where he bought a dime composition book and wrote the story in Elizabeth’s Scott Park. The court off Greenwich Village’s Perry Street actually exists. Lovecraft learned of its existence in a New York Evening Post article of August 29, 1924. The stranger’s house is apparently based on a mansion on the block bounded by Perry, Bleecker, Charles, and West 4th streets, built as early as 1744 and demolished in 1865.

Lovecraft had moved to New York City in March 1924 for his short-lived marriage to Sonia Greene. He moved back to Providence, Rhode Island in April 1926, having developed a thorough aversion to New York. The opening paragraphs of HE are believed to be largely autobiographical, expressing Lovecraft’s own feelings about the city.

A suggested literary model for “He” is Lord Dunsany’s The Chronicles of Rodriguez, in which a wizard displays visions of past and future wars in successive windows. 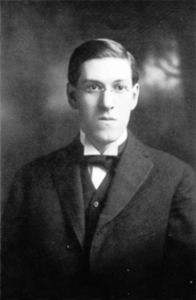 Howard Phillips Lovecraft (August 20, 1890 – March 15, 1937) was an American writer of weird, science, fantasy, and horror fiction. He is best known for his creation of the Cthulhu Mythos.

He became active in the speculative fiction community and was published in several pulp magazines. and later became the center of a wider group of authors known as the “Lovecraft Circle”. They introduced him to Weird Tales, which would become his most prominent publisher. Lovecraft’s literary corpus is based on the idea of cosmicism, which was simultaneously his personal philosophy and the main theme of his fiction. Cosmicism posits that humanity is an insignificant part of the cosmos, and could be swept away at any moment. He incorporated fantasy and science fiction elements into his stories, representing the perceived fragility of anthropocentrism. This was tied to his ambivalent views on knowledge. His works were largely set in a fictionalized version of New England.

Civilization’s decline also plays a major role in his works, as he believed that the West was in decline during his lifetime. Lovecraft’s early political opinions were conservative and traditionalist. Following the Great Depression, Lovecraft became a socialist, no longer believing a just aristocracy would make the world a fairer place.