This is a short story about Georg Bendemann and his relationship with his aging father. While Georg is telling his father about his friend in Russia his father goes into a rage, ridiculing and degrading his son. Then at the end of his rant, he issues his final judgment – death by drowning. 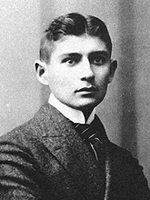 Franz Kafka was a Czechoslovakian writer who lived from 1883-1924. Though virtually unknown during his lifetime, Kafka has come to be known as one of the most influential writers of his century. His writings have been recognized as symbolizing modern man’s anxiety-ridden and grotesque alienation in an unintelligible, hostile, or indifferent world.