The philosopher king is a hypothetical ruler in whom political skill is combined with philosophical knowledge. The concept of a city-state ruled by philosophers is first explored in Plato’s Republic, written around 375 BC. Plato argued that the ideal state – one which ensured the maximum possible happiness for all its citizens – could only be brought into being by a ruler possessed of absolute knowledge, obtained through philosophical study. 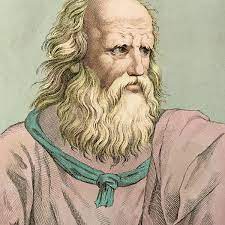 Plato was a Greek philosopher born in Athens during the Classical period in Ancient Greece. He founded the Platonist school of thought and the Academy, the first institution of higher learning in the Western world.

Plato is widely considered a pivotal figure in the history of Ancient Greek and Western philosophy, along with his teacher, Socrates, and his most famous student, Aristotle. He has often been cited as one of the founders of Western religion and spirituality, Western political philosophy, and greatly influenced Christianity.